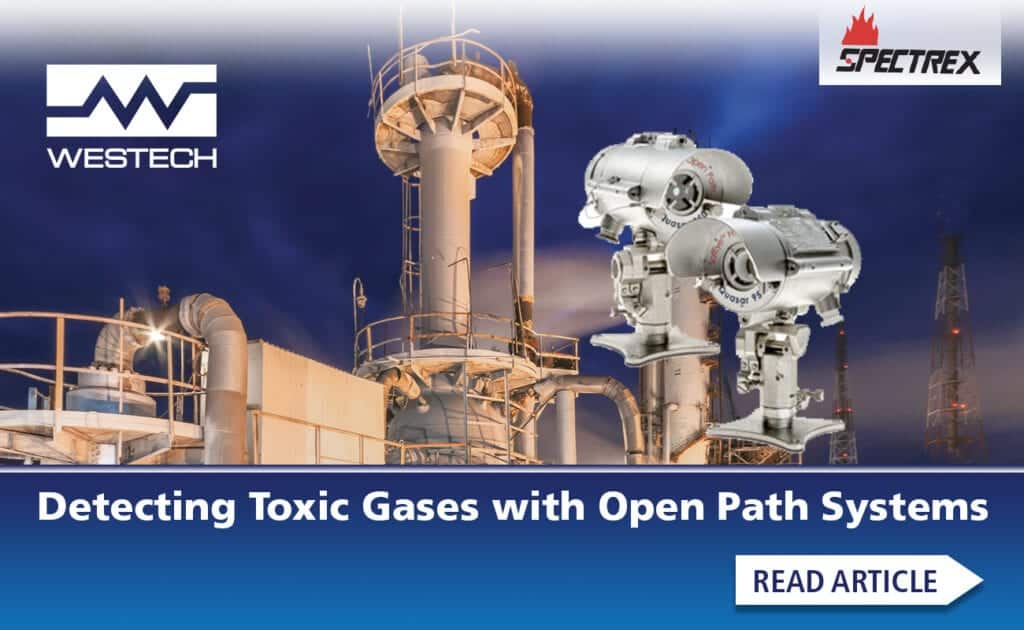 In February 2015, a Coca-Cola bottling plant in Speedway, Indianapolis initiated emergency procedures after a strong ammonia smell was sensed by 25 workers. The plant was immediately evacuated and a significant emergency response was provided by local Fire Department and Hazmat teams. The source of the leak was an 80,000 gallon tank, which was used in the refrigeration processes within the plant. Concentration readings fell from 700 ppm to about Photography courtesy of Piho Engineering 150 ppm, which was significant, though the plant could not be operated until they were further reduced to below 25 ppm. Throughout the incident, no threat was posed to anyone outside the plant, where readings were 2 ppm.

Another example of an industrial ammonia leak occurred in a frozen storage and logistics business in Shanghai, China in August, 2013 The chemical was used in food refrigeration involved in the importing, exporting, storage, and processing of seafood. A detached pipe cap caused a huge leak, as reported by the Shanghai Municipality Information Office, and led to the deaths of 15 people and injuring an additional 25.

In November 2014, a large amount of Hydrogen sulfide (H2S) blanketed most parts of Moscow, Russia where emergency authorities directed everyone to stay indoors. It was later discovered that the gas had originated in a Moscow oil refinery but no injuries occurred.

In May 2014, an oilfield worker in the municipality of Hazelwood, in the province of Alberta, Canada was found unresponsive at one of the customer worksites. It appears that the worker died from exposure to high levels of H2S.

While toxic gases may have many benefits and useful applications within a variety of industries, high concentrations can cause significant damage to humans and be life threatening.

Two particular examples of toxic gases commonly present in industrial and agricultural environments are ammonia and hydrogen sulfide. Ammonia is utilized in various industries in a wide range of processes, either as raw product or a byproduct. These include carbon capture and storage in the oil and gas industry, fertilizer, nitric acid, explosive, plastic production and more. Ammonia, NH3, in gaseous form is a colorless gas with a characteristic smell.

However, operating staff often debate about which type of device to select and where to place the sensors for best coverage. The confusion stems in part from the wide range of flammable materials that process plants may handle; a single process area may contain several different types. In addition, the development of new technologies like visual flame imaging and pattern recognition, while improving identification effectiveness, has created uncertainty around the choice of flame detectors. Fortunately, the particular application rather than detection technology determines the proper pick. In this article, we’ll examine the criteria for selection and review the detector types commonly used to protect against industrial fires.

To continue reading this white paper please fill in the form below.

We use cookies on our website to give you the most relevant experience by remembering your preferences and repeat visits. By clicking “Accept All”, you consent to the use of ALL the cookies. However, you may visit "Cookie Settings" to provide a controlled consent.
Cookie SettingsAccept All
Manage consent

This website uses cookies to improve your experience while you navigate through the website. Out of these, the cookies that are categorized as necessary are stored on your browser as they are essential for the working of basic functionalities of the website. We also use third-party cookies that help us analyze and understand how you use this website. These cookies will be stored in your browser only with your consent. You also have the option to opt-out of these cookies. But opting out of some of these cookies may affect your browsing experience.
Necessary Always Enabled
Necessary cookies are absolutely essential for the website to function properly. These cookies ensure basic functionalities and security features of the website, anonymously.
Functional
Functional cookies help to perform certain functionalities like sharing the content of the website on social media platforms, collect feedbacks, and other third-party features.
Performance
Performance cookies are used to understand and analyze the key performance indexes of the website which helps in delivering a better user experience for the visitors.
Analytics
Analytical cookies are used to understand how visitors interact with the website. These cookies help provide information on metrics the number of visitors, bounce rate, traffic source, etc.
Advertisement
Advertisement cookies are used to provide visitors with relevant ads and marketing campaigns. These cookies track visitors across websites and collect information to provide customized ads.
Others
Other uncategorized cookies are those that are being analyzed and have not been classified into a category as yet.
SAVE & ACCEPT