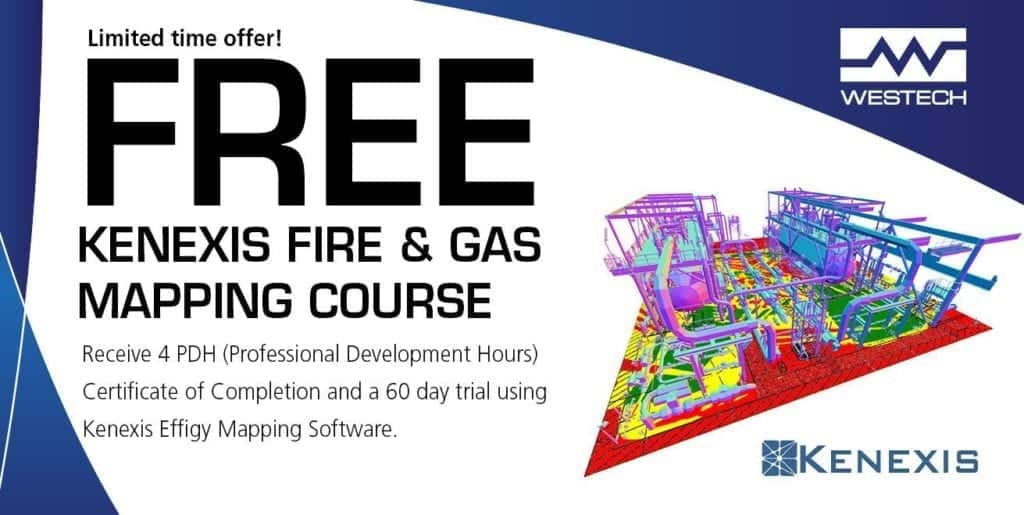 In order to help, especially in this time of COVID-19 related social distancing where so many engineers are working from home and trying to find ways to maintain their professional development, Kenexis is offering (for a limited time) a COMPLIMENTARY 3-4 hour training class (via Microsoft Teams or Webex) on how to perform gas detection mapping for plant areas with LPG containing equipment.

The training course will include a certificate that you can use to demonstrate professional development hours that you might need for maintaining your PE license. In the training course, we will provide an overview of what fire and gas mapping is, and how it is used to lay out fire and gas detectors for process facilities. Afterward, we will log into the Kenexis Integrated Safety Suite (KISS) and use the Kenexis Effigy software to perform a gas detector layout for the LPG storage area shown below. 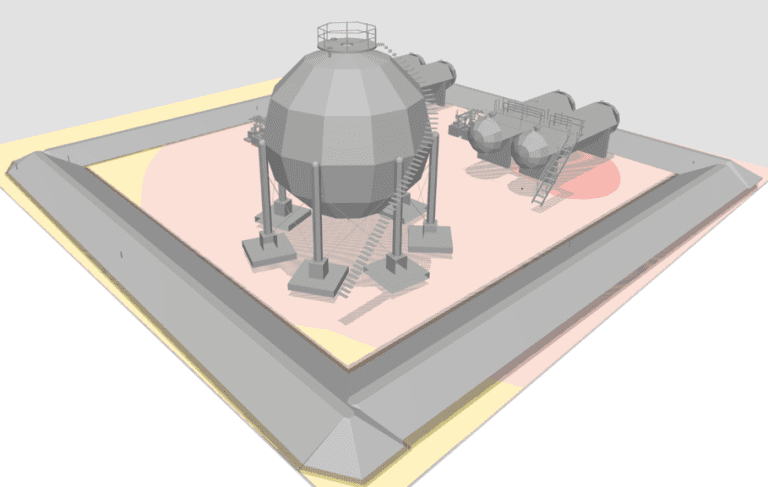 For this example facility, we will build out the study in Effigy by importing a 3D model, inputting site data (like weather conditions), inputting the results of dispersion modelling and frequency analysis, and finally laying out detectors, determining achieved coverage, and optimizing locations. This training seminar will be performed by each student individually using their own 60-day license (also complimentary) to Effigy.

Take advantage of this limited-time offer complimentary 3-4 hour training seminar (professional development hour certificates provided) on fire and gas mapping using Kenexis Effigy software, with a 60-day trial license of the software included which is only available for the next couple of weeks. We will offer 2 to 3 sessions per day, depending on the number of people who register.

Many industries utilize flammable gases that are held as a liquid under pressure, but if released into the atmosphere, they will flash to vapour in a short period of time. The most common of these chemicals are generically referred to as Liquefied Petroleum Gas (LPG), and most consist of propane and butane, and mixtures that primarily consist of these components. These chemicals are used for a variety of purposes ranging from consumption as fuels to feedstocks for a range of refining and petrochemical processes. While the flammable hazards of these chemicals are well known and well understood, recent events have caused many users of these chemicals to reconsider the range of safeguards that they employ to ensure the tolerability of risk associated with equipment containing these chemicals.

Process industries that utilize large quantities of LPG include petrochemicals and refining. For instance, in an oil refinery, LPG can be found in the following units Crude Unit, Gas Plant, Naphtha Reforming, FCC, Coking, Alkylation, along with tank farm storage areas. In general, petrochemicals and refining utilize fire and gas detection equipment to a lesser degree than other industries like offshore oil and gas production. The reason for less reliance on Fire and Gas Systems (FGS) is related to factors that have historically made these industries less risky, including:

Furthermore, safety and risk assessments that are used in these industries do not credit FGS with any measurable amount of risk reduction. Most of the industry utilizes an approach that includes qualitative HAZOP and semi-quantitative LOPA.

Recent incidents have provided the lesson that it is more critical than ever to design and install effective hazard mitigation systems in large complex process plants such as petroleum refineries. As we make continued progress toward efficiency, our process facilities are intensifying – higher temperatures, higher pressures, larger equipment contained in a smaller footprint, and vertical expansion of plants instead of spacing out. This is evident when viewing modern process plant, as shown in the typical example below. These factors are increasing the hazards of our plants and decreasing the ability to effectively egress from plants. The net effect is that risk profiles are increasing and approaching other high-hazard industries like offshore oil and gas production that are more reliant on early and effective fire and gas detection as an important part of their portfolio of engineered safeguards. 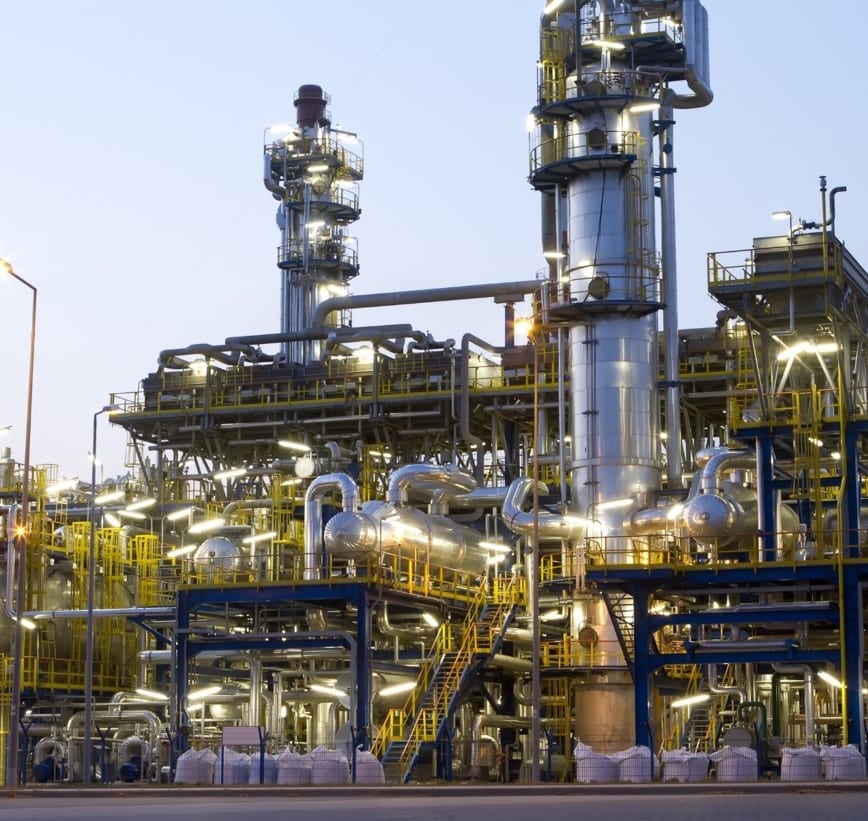 In addition to the overall higher levels of risk due to intensification, there are areas of process facilities that have special risks that might not have been considered adequately safeguarded against hazard escalation. Specifically, process equipment that contains LPG presents additional escalation risk beyond the simple loss of containment from the vessel itself. LPG containing vessels are also subject to a potential Boiling Liquid Expanding Vapor Explosion (BLEVE). A BLEVE, in LPG equipment services, is usually an escalation consequence from a fire that results from the initial consequence. When an LPG containing vessel is exposed to a fire (pool fire underneath or impinged jet fire), the liquid in the vessel begins to boil from the heat of the fire. This vaporizes the contained liquid, increasing the pressure – resulting in the activation of pressure relief. As this continues, the level in the vessel decreases – exposing more surface area to damage because liquid is not available to carry heat away. Even though relief valves are operating the vessel experiences extreme thermal stress. Eventually, these factors cause the vessel to catastrophically fail. Failure results immediately in a physical explosion and shortly thereafter a large fireball develops as the flammable material in the vessel expands, entrains air, and rapidly combusts. For a brief but good explanation of the BLEVE phenomenon, I would recommend the following video.

In addition to the trend toward increasing risk profiles such that FGS safeguarding is becoming more critical, an incident in a US refinery in July of 2019 provides some evidence that FGS, specifically for LPG equipment containing areas, is more critical than might have been thought. The incident occurred in an Alkylation unit where LPG (propane/butane) is used as a process feed in the production of high octane fuels. In the incident, material was released due to a piping failure near a pump. The material ignited, resulting in a sustained fire. Eventually, the fire impacted surrounding pressurized LPG equipment, and a massive BLEVE occurred with a large explosion and hazards that extended far from the initial explosion. Regrettably, the incident devastated the operating company and caused the facility to close. A complete explanation of the event as developed by the Chemical Safety Board is contained in the following video.

After the consequence, a lot of consideration has gone into what could have prevented this incident from occurring or minimize its consequences. One of the factors that is frequently considered is that the gas cloud was allowed to develop and expand for some time before any action was taken. Based on regulatory findings and agency citations, if better gas detection was available, there would be a higher likelihood that, either through automatic action or manual action from trained and informed operators, that the process could have been isolated the fire controlled. If these actions could have been taken, there is a chance that the BLEVE might not have occurred. Consider the following video that includes a timeline of the events using camera footage from inside the facility. Based on the footage, it can be argued that some time was available to take mitigative actions before the initial ignition of the release to minimize consequences.

This incident is causing legislators, regulators, standards making bodies, and industry in general to consider strengthening the implementation of FGS in general and around LPG containing equipment specifically. Standards like API 2510 – The Design and Construction of Liquefied-Petroleum-Gas Installations at Marine and Pipeline Terminals, Natural Gasoline Plants, Refineries, and Tank Farms are currently under re-validation and incidents like this could affect the committee discussions. ISA, the International Society for Automation, has recently (2019) release an updated version of its technical report ISA TR 84.00.07 – Guidance on the Evaluation of Fire, Combustible Gas, and Toxic Gas System Effectiveness. which is a critical tool in helping process plants to decide how many detectors are required and where they should be located.

Kenexis is a pioneer in the performance-based placement of fire detectors and gas detectors in the process industries, starting with our strong involvement of the ISA technical reports, premier technical safety consulting services, and best-in-class fire and gas mapping software – Effigy. Beyond our work with the standards committee, we have also developed the premier training course on fire and gas mapping, which is distributed through ISA as EC56P – Fire & Gas System Engineering – Performance-Based Methods for Process Facilities. We are also the authors of the only book available on fire and gas mapping, Performance-Based Fire and Gas Engineering Handbook (also published through ISA).

The process of determining the proper location and number of gas detectors is conceptually simple, but in application requires a lot of detailed work to be executed. Ultimately, one needs to generate a number of models that represent the dimensions of the gas clouds that would result from leaks in the equipment being protected. These models need to consider weather conditions (wind direction, speed, and atmospheric stability), release orientations, and release frequency. Then, each of the gas clouds needs to be assessed, one at a time, to determine if the gas cloud comes into contact with any of the proposed gas detectors. This analysis results in the calculation of scenario coverage, or what fraction of the releases (considering their relative frequencies) will be detected by a given array of detectors. This coverage assessment is compared against a numerical target (e.g., 80%) that is defined for the area based on the level of risk that it poses. As you can imagine, this is not a trivial amount of work, but it is definitely manageable, especially if sophisticated 3D computer tools are employed to do the heavy lifting.